Tell us what you think about Backup4all and what would make it even better.
Post Reply
21 posts

I am sorry, but that does not correspond to the previous posts.


by Support » 07 Jul 2010, 10:02
If you want to close the application and the computer (as in your case), you need to press the Stop button. That will process the current file and stop the backup right after that. The files already backed up will not be backed up again next time you run the backup.

by Blower » 19 Jul 2010, 08:03
After uploading three files, on the fourth I tried to do as you told me. The first instruction was to press the Stop button. I couldn’t do it because the button was greyed and the corresponding function on the context menu was also greyed.

How come the backup had not yet started with three files already in the server and in the middle of backing up the fourth???

by Support » 19 Jul 2010, 15:03
The Stop button is grayed out as long as Backup4all creates the file list. When the backup starts, the button is available.

Please create us a temporary account on your SFTP server.
Send us the details by email to support[at]backup4all[dot]com
Do you know you can monitor your backups remotely with Backup4all Monitor? You can read more here: https://www.backup4all.com/backup4all-monitor.html
Top

I am sorry for having taken far much too long to go on trying and solve this issue, so now it is mostly a fresh start, even because I reinstalled after uninstalling with "Your Uninstaller". As It didn't erase everything on the user profile, I cleared the remaining by hand. I also updated the app with the latest 218.

Now, it seems to be OK except for stopping and resuming very large uploads when we have to shut down the computer to resume on the following or another day.

I followed your earkier instructions as above:

Support » 07 Jul 2010, 10:02
If you want to close the application and the computer (as in your case), you need to press the Stop button. That will process the current file and stop the backup right after that. The files already backed up will not be backed up again next time you run the backup.

This was the first time I had the opportunity to try it out after my last post and e-mail, but there is a problem with the procedure. I tried with a set of small text files, mostly Winword (*.doc and *.docx), adding to 17.2MB, which became about over 5.3MB after zipped, and set the maximum size to split at 1MB. While uploading the backup, I could see the 1MB files being uploaded to the server one by one with Filezilla.

After pressing the Stop button (several trials between 10% to 80% of any uploading file), on the right side of the uploading percentage counter and graphic, on the Status bar, the path of the file being uploaded is replaced with the indication "Stopping backup", a time counter, and "Please wait....." When the current file finishes to be uploaded the text on the Status bar is replaced with the following: "Update catalogue", and the time counter.

I expected it would happen as you described on my quotation, but that was only until then, because as soon as the catalogue was written, I suppose, the upload resumed to the next and following files until completely finished, just as if the Stop button had not been pressed. The only difference was the button became grey and remained like that for good.

Can you please tell me how can I overcome this issue? I know you need and have patience, But I am very persistent because Backup4all works very smoothly with FTP, and has all the options I need except one, which is no 7Zip compression, no other choice than the not good Zip.
Top

Sorry for the late response.
Please try again to reproduce that problems and send us the last backup log from View->Job Logs->Last backup log, to support[at]backup4all[dot]com
Do you know you can monitor your backups remotely with Backup4all Monitor? You can read more here: https://www.backup4all.com/backup4all-monitor.html
Top

I know a lot of time passed. I would like to have this program, but I cannot spend all my time trying to make it work with resuming SFTP backups from one day to the other (after rebooting).

I Tried following your instructions. This is how I did. The settings used are the same as those I gave you before and you checked as OK (I saved the files). I made spacial attention regarding your advice about

If you use FTP as destination, one more step is necessarily.
Please open Backup Properties->Advanced and uncheck the "Use local catalogs" option.

I gathered a bunch of over 600 files with medium sizes of 3MB in a total of 2.23GB to backup to the server. When it had uploaded 51MB (2%) I pressed the STOP button. The application finished to upload the file and stopped slowly quite a while after clicking on the STOP button. I am attaching the snapshot of how it was after stopping completely (Stopping.png).

As it was stopped, I tried to exit Backup4all before rebooting, but there was this error: Cannot exit application while busy. Because the idea (according to this post) was to resume this uploading backups from one day to the other I had to reboot to try, so I forced rebooting. When trying to reboot I received the same error notice again: Cannot exit application while busy, but I went on with rebooting.

The app. took a long time to start, and when it did it presented the attached snapshot (AfterReboot.png) containing this text: Last backup was successful. I checked on the server and the Zip file with the same size was there. Then I clicked on the large Restore button and the backup restarted, but not resuming as you told me. It deleted the uploaded portion and started right from the beginning. about 40min later i tool another snapshot (LaterAfterReboot.PNG).

There still is something wrong. The problem is that I can't find where my mistake is. How can I make it work, please? I don't know if I've become dumb, but I don't have these problems with other backup applications. I prefer your because it has functions that I need and can't find on others. It is better, but I must be able to make it work. 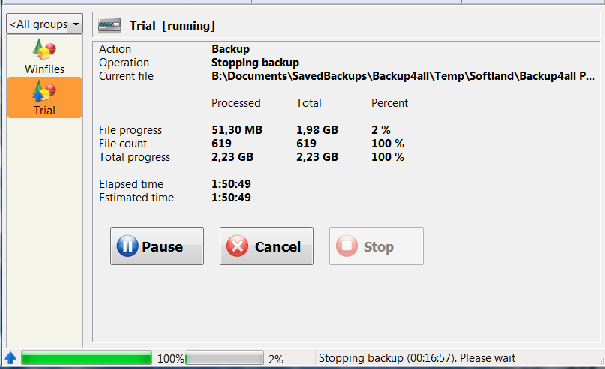 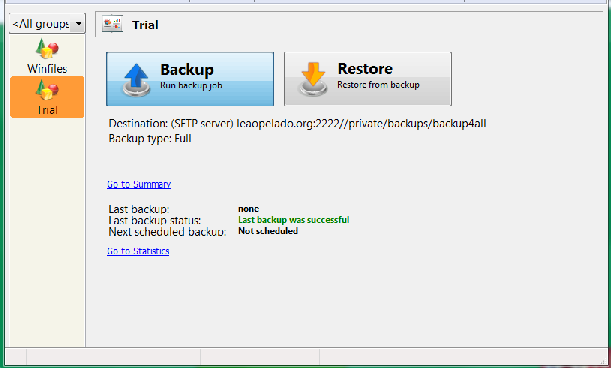 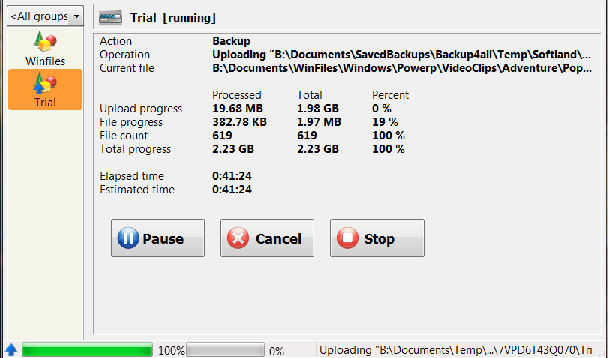 The Stop command is not instant.
It works like this: you press Stop, then Backup4all will continue processing the current file and upload it to SFTP server. After that it will save and close the catalog, then the catalog is copied to SFTP server.

If you killed the application, the backup catalog was not saved and the backup will start from the beginning next time.
Do you know you can monitor your backups remotely with Backup4all Monitor? You can read more here: https://www.backup4all.com/backup4all-monitor.html
Top

Thank you for the reply.

I understand how this works, but I must be still doing something wrong because the uploading backup does not stop as you say and I expected.

I selected a set of files and on the SFTP server page configuration at Advanced => Maximum file size I chose 2MB split. When backing up, after four had been backed up I pressed the Stop button. I watched the progress that was approaching the 2MB splits. When it arrived at the end of 2MB it just went on to another block, and another, and another, not stopping with the Stop button greyed.

I must be missing something. I searched on the help and also on your site, but couldn't find any reference. What I want to do is to compress the files independently with Winrar and back them up independently as they are, and maybe split them if they are very large. This is the most convenient for me because I could get any specific file that I might need very easily. Will this be possible, please? If not, can I back them up rared in small blocks? Also important, what am I doing wrong that the backup doesn't stop?
Top

I am not sure I was clear enough when explaining you. I will add some more details.
Let's say you have 619 files of 3 MB each.
1. Backup4all will create the list of files to be backed up (619 files).
2. Backup4all will add all files into a zip archive.
3. As I can see from the images you sent us, all 619 files were added in the zip file.
If you press Stop button in this phase, Backup4all will finish the backup process for the files already in zip.
4. Backup4all will split the zip file locally and will upload the 2 MB split parts to your SFTP server.

It seems you pressed Stop at point 3. If you would press Stop at point 2, the backup would not process all files.
Do you know you can monitor your backups remotely with Backup4all Monitor? You can read more here: https://www.backup4all.com/backup4all-monitor.html
Top

Sorry to butt into someone else's post but I think my problem is exactly the same. I am able to stop the backup midway, shutdown the computer and restart the software B4A. But then what should I press or select to resume the backup? I tried first by pressing the large BACKUP button but it seemed it would start from the very beginning. Then I tried, in another instant, to press OPEN button select the .bkc file. That would open a window stating "Confirm: There is already a backup job with the "Pictures" name. Do you want Backup4all to rename the imported job? YES, NO, NO TO ALL, YES TO ALL.

Very confusing! All I need is to resume the backup from where it stopped as per the post by Support in the previous page.
Top
Post Reply
21 posts

Frequent QuestionsVisit the Frequently Asked Questions section to find answers for the most popular questions we receive.

ARTICLESRead our blog to find out the latest news about Backup4all, announcements and other important updates.

KNOWLEDGE BASEVisit the knowledge base to access all tutorials on how to use Backup4all and best practices.

SUPPORTStill have questions on how to use Backup4all? Send us an email and reply promptly.